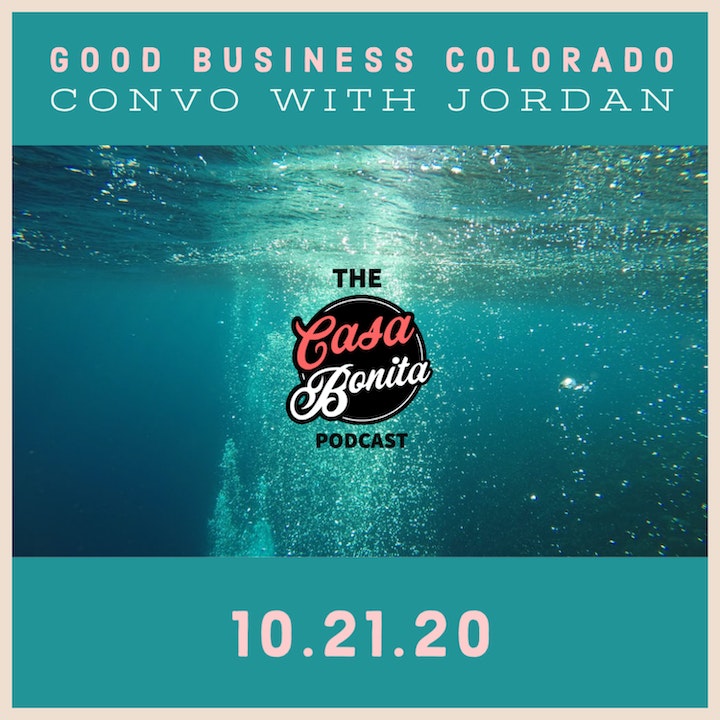 Episode 7: As you may have noticed, the show intro makes a few content promises. Well, my husband Thomas recently pointed out that I have gone off script and haven’t delivered on those promises.

In an attempt to impose order and make sense of this chaotic world in which we’re living, I have gone back to the original plans. Don’t worry, I’ll definitely go off script again, it’s unavoidable.

In this episode, I will first explore the living in Colorado promise from the perspective of a values-driven business owner (myself) with Jordan Pryczynski, director of membership at a wonderful organization where I am proud to be a member, Good Business Colorado. Bonus, Jordan is a Colorado native and he has many Casa Bonita memories to dive into.

Speaking of diving… did you hear that Casa Bonita is being sued by a professional diver for age discrimination? (See what I did there? Pun.) Casa Bonita cliff diving seems to be pretty heavily inspired by La Quebrada Cliff Divers in Acapulco, Mexico. Fun fact- cliff diving, especially cliff diving in Acapulco is totally, like, a thing in Mexican popular culture. The 1963 Elvis Presley film, Fun in Acapulco, is credited with bringing Mexican cliff diving to the world’s attention. I don’t know if that’s actually true, it might have been on the scene before Elvis came along, he might be totally Columbusing the whole thing, I don’t know. But, just in case, I watched the movie to prepare for this episode and I can’t wait to tell you all about it.

So, Diving might actually come to have a significant presence here in Colorado. According to September 2019 headlines, USA Diving, the national governing body for the sport of diving, announced last year that they would be relocating their headquarters to Colorado Springs to be closer to the United States Olympic & Paralympic Committee. There hasn’t been a lot of post-move news about how USA Diving is liking their new Colorado digs, and it’s not clear if they ever made the move! I can’t find any news on it. I creeped on their Linked in profile and they only have one employee listed as living in CO Springs and their official location is “United States of America.” So, that clears things up. If you know what the deal is with USA Diving’s planned move to Colorado Springs, leave a voicemail message on our shiny new website, www.casabonitapod.com!

Later, we’ll check out the available real estate close to the top-ranked cliff diving location in Colorado and we’ll explore the cost, feasibility, and affect on your property value if you install a pool with a high dive in your backyard.

I think you’re gonna like this episode, thanks for listening.

--- Send in a voice message: https://anchor.fm/casabonitapod/message